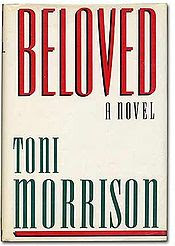 Yet.
I adore Toni Morrison.

Beloved is perhaps Ms. Morrison's most praised novel. It won her the Pulitzer Prize and was certainly instrumental in her becoming a Nobel Prize laureate, something no American author has managed since. On a more Pop level, it was the first Book of the Month Club selection written by an African-American author since Richard Wright's Native Son 40+ years prior. In addition, Ms. Morrison is to the Oprah Book Club, what the New York Yankees are to the World Series. On a personal level, it is the second Morrison book I've read (The Bluest Eye being the other), and the first book in my Black History Month reading exercise.

Beloved is the story of Sethe, a runaway slave, and her daughter Denver and their trials dealing with the spirit of Sethe's deceased daughter, who comes to be known as Beloved, because this is all Sethe could afford to inscribe on her gravestone. I pretty much knew this going in, but I wasn't prepared for there to be some "spookiness" involved. Yeah, I know what do you expect from a ghost story, right? Still, I guess I wasn't expecting it from this ghost story.

I also knew that there would be a fair amount of description of the conditions of slavery. It was, of course, unpleasant. I actually do tend to feel some guilt for the actions of my ancestors, so this stuff is never easy going. Possibly the most eye opening aspect to me was how Morrisons described the slaves' need to not "love too much"...not a mother, not a father, not a mate, and most certainly not one's children. How depressing.

Beloved is a difficult read. Some passages I had to re-read two or three times to understand. Some passages I have yet to completely understand. The structure is a bit of a mess. Morrison relies heavily on literary devices such as flashbacks (the novel is alternately set during the Civil War on a farm in Kentucky called Sweet Home, and years later after the way in Sethe's home in Cincinnati), and changing the point of view, and the TENSE. The point of view changes often happen mid-passage without a break, and often do not only involve changing from one character to another, but also changing from third to first person. Same thing with the flashbacks. It makes all of it a bit of a struggle to follow. However, the flipside is that when all of the pieces the reader is juggling start to slide into place the result is a more powerful experience. Not to mention, Morrison's prose is unarguably beautiful.

My favorite character in the book was Stamp Paid. A male character, who helped Sethe and several other slaves, runaway to safety in Ohio. He is a guy, who always tries to do the right thing...pay it forward, and prides himself on the fact that every 'colored' door in town is open to him. He does find Sethe's door closed to him at one point...however, even when he wrongs someone, it is done with the right intentions. As someone who has experienced this type of man for untold years, I can attest to Ms. Morrison's ability to write believable, compelling male characters. She is understandably more known for her feminine characters (they are done well, too), but she writes men well too.

For me, Beloved was a slow, difficult read. And for this reason I understand when I hear/see other readers complain about it. It isn't easy. But, as mentioned above when everything is illuminated (apologies to Mr. Foer), the message is that much more powerful. It is worth the effort.
Posted by Tony D at 11:05 AM